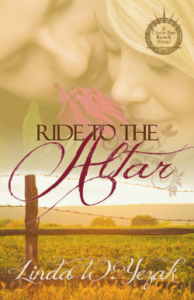 Cattle are dying on the ranch–and not of natural causes. The financial loss to the Circle Bar has first-year owner Patricia Talbert questioning her every move. But to add to her stress, her father demands she return to New York and make amends with her mother. The depth of her resentment runs deeper than she knew, and the confrontation only widens the mother-daughter gap.

While she’s away, Talon Carlson discovers the reason behind the attack on the ranch, and it sends him on an emotional tailspin. How can he remain true to Patricia when his first love still plagues his mind from the grave?

As the gap grows wide and the attacks increase, both Patricia and Talon are stretched to the limit.

How many hurdles must they jump in their Ride to the Altar?

Excerpt from Chapter One

A handshake is the initial measure of a man. The grip provides the best and the worst first impressions. Impossible through Skype, soTalon Carlson determined to use the alternative: steady, eye-to-eye contact.

He scrubbed his hands down his jean-clad thighs. Funny how he could propose to Patricia Talbert in an arena of seventy-five thousand avid bull-riding fans, yet he shook like a wobble-kneed colt in front of the blank computer screen. But he was just old fashioned enough to want to do this the right way.

He poked a button, Skype connected, and Patricia’s father, Dale McAllister appeared on the monitor. At six o’clock in the morning Eastern time, the U.S. Senator from New York wore a suit and tie and looked ready for his Monday commute to DC. The somber attire complimented his authoritarian expression. Gun-metal gray hair held silver wisps at the temples, and dark eyes bore an intensity matching his profession—or matching a father who was meeting his only daughter’s fiancé for the first time. Didn’t matter that the daughter was over thirty and the new owner of a two-thousand-acre ranch in Texas.

“Believe me, I’ve heard a lot about you too.” Mr. McAllister’s voice sounded deep, gruff. Intimidating.

“Yes, sir. I’m sure you have.” He gulped. “Sorry that we have to meet like this. We intended to fly to New York—”

“Yes, Patty told me. No need to apologize. I understand you have a responsibility to your church, and performing funeral ceremonies is part of it.” The senator offered a sympathetic nod.

“Sorry for your loss.”

“Thank you.” The funeral had been for one of the most beloved women in the county, Beth Griffith. Her husband, Griff, had asked Talon personally to perform the eulogy. As a bullfighter, Grif had saved Talon’s hide more than once, so there had been no question that Talon would say yes, even if it meant missing their flight to New York.

Mr. McAllister leaned back, though the distance between his face and the monitor didn’t lessen the effect of his scrutiny. “I understand you have something to ask me.”

“Yes, sir,” Talon squeaked, then cleared his throat. He tried again, clasping his hands between his knees to stop their shaking. “Mr. McAllister, I love your daughter, and she loves me. I’d like your permission to marry her. Your permission and your blessing.”

Pat’s father tapped his fingers together. “You know she’s been married before.”

“You know she was hurt.”

Nothing Talon could say to that. Since the older man’s gaze seemed distant, best to just wait him out. He would never hurt Pat the way Kent Talbert had, but proof accompanies action. Mr. McAllister would know the kind of stuff Talon was made of as time went on. His saying so now wouldn’t be convincing.

“Sometimes I think if he hadn’t died, heaven help me, I would’ve killed him myself.” The senator focused on him again. “You know what was wrong with him?”

Besides the fact he was a no-good, opportunistic, cheatin’ womanizer, no. “Got my thoughts. What do you think?”

“He was a city boy. City folks—especially rich city folks—have different ideas from those of us raised on farms and ranches. Different priorities.”

This seemed strange from a man who divided his time between DC and New York, but Talon nodded. “Yes, sir.” After all, Mr. McAllister had been raised on a ranch, and it was his brother, Jake, who’d willed this one to Pat.

“I want a man for Patty who would make her happiness his top priority.”

He straightened in his seat. “Mr. McAllister, I don’t fall in love easily. Only once before in my life, and she died before we could get married. I love your daughter. I have a lot of respect for her. She’s a good woman, and I’m honored she agreed to be my wife. I’ll do everything in my power to assure her happiness and well-being.”

The senator rubbed his jaw, pensively eying Talon through the monitor. “Patty told me about your first fiancée. What was her name?”

“Losing her was pretty rough on you.”

“Yes, sir.” About killed him. Took him years to get over her death, an experience made worse because he’d been a suspect in her murder. “Not something I care to repeat.”

“I don’t imagine. But if you loved that deeply once, you can do it again. You’ve been given a second chance, son. That doesn’t happen often.”

“No sir, it doesn’t. I’ve been mighty blessed.”

“I want you to continue to consider Patty a blessing in your life. That’s what she is, and she deserves to be honored as such.”

Talon didn’t need to be told.

“She’s old enough to make up her own mind about who she’ll marry, but I appreciate your asking me. That means something.” He sat quietly a moment, his face inscrutable, then he nodded. “I’m going to trust you with my little girl, young man. Don’t let me down.”

The grin started in Talon’s heart, then burst forth on his lips. “I won’t let you down … Dale.”

“Good. Welcome to the family. We’ll let the women handle all the details.” He shifted in his seat, making the leather squeak. “Is Patty around? I’d like to talk to her.”

As Talon rose from his chair, the senator said, “Nice speaking with you, son.”

As he strode to the door to find Pat, he allowed himself a full-fledged grin. That hadn’t been too bad. The hard part had been reading the man. Her father bore two expressions— stern and not-so-stern. Probably a requirement for being a senator. But then, he’d called Talon son and said to call him Dale. Good start.

When he opened the door, Pat stumbled through it. She caught her balance with a hand against the doorframe. Standing in the hallway with a crimson blush accentuating her sheepish expression, she looked adorable.

He chuckled. “Were you able to hear good enough?”

She scowled and swatted his arm. “Did it go all right? What did he say?”

“He said he wanted to talk to you.”

“Okay, but what did he say about your proposal?”

“Talon!” One of the ranch hands, Chance Davis, burst through the front door and caught sight of them in the hall. “We’ve got more cows down.”

“Ours or Griff’s? How many this time?” Talon reached for his coat and hat on the rack by the door and headed out with Chance. They couldn’t afford to keep losing cattle. They’d already stretched themselves too thin.

Patricia started to follow the men out to the cold late-October morning, but her father barked her name from the computer. She did an about-face and returned to the office.

The news about the animals had rattled thoughts of her dad right out of her mind. Every dead cow was money out of their account. How many had they lost this time?

She settled in the swivel chair Talon had abandoned at her cluttered desk and tried to offer her father a smile. “Hi, Daddy.”

“Hi, baby. What was that I heard about dead cows?”

She shot a breath through her teeth. “We’ve lost a few recently, and we don’t have a clue what’s killing them.”

“I heard Talon say something about them being Griff’s. Maybe that won’t hurt your herd.”

“Griff’s cows are our cows. He had to sell off his cattle and several acres of land to pay his late wife’s medical bills.” Broke her heart to think of it. After the funeral, the whole county had pitched in to help, but it wasn’t quite enough. He’d still had to sell some of his assets. “We bought a quarter of the herd and about five hundred acres that join the ranch to the north.”

Her dad frowned. “I didn’t realize the Circle Bar was flush enough to make that kind of purchase.”

She swept her fingers through her hair. They were okay for the most part, but the point was to winter the herd, then sell them in the spring to recoup their some of their investment. Impossible if the cattle kept dying.

But how could she tell her father they could lose a substantial amount of money? How could she admit that the decision to put the Circle Bar in such a financial predicament had been her own? Oh, as foreman—and her fiancé—Talon had agreed, but the ultimate decision was hers. Her first major move as a ranch owner could cost her the spread.

She shook her head. They’d pull through. They had to.

“We’re good. It’s a little tight, but come spring we’ll be better.” She lightened her voice with an uncertain optimism. “Spring calving will help the bank account.”

“I’m sure it will. Best time of the year.” He slapped his chair arms and began to push himself up. “I’ll get your mom. I know she’s chompin’ at the bit to talk to you.”

“Don’t, Daddy. Not right now. I want to check on the cattle and see what’s happening.”

He lowered himself to his seat again. “I understand, and I’ll cover for you this time. But you will have to talk to her someday, Patty.”

Not if she could help it. “I’m not ready yet. After the stunt she pulled, it may be awhile.”

“Don’t act like you don’t know. She sent Aunt Adele here to break us up.”

He winced. “Yes, I know. That was wrong of her. But this has been going on for a while. You need to settle it.” He held her gaze with an intensity he rarely used with her. “If you’re willing to throw away a relationship with your mother because your feelings got hurt, how will you ever make a marriage work?”

“Ouch, Dad.” There was more to it than that, but she didn’t want to explain to him. Not now. She’d grown antsy to check the herd, and the last thing she wanted to discuss was her on-going feud with her mother. “I’ll talk to her, but not right now.”

“Fine. I’ll have her call you later in the week. Will that work?”

“That’ll work.” Especially if she could be anywhere but here when the call came. “Gotta go, Daddy. Love you.”

She disconnected before he could speak again. She had other things to worry about than her meddling mother.