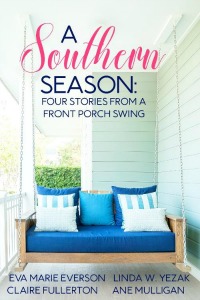 Four seasons. Four stories. Each set in the enchanting world of the South.

Ice Melts in Spring by Linda W. Yezak
When Kerry Graham’s boss forces her to return to the Gulf of Mexico where her husband drowned years ago, she feels only spring’s chill and not the warmth of the Texas sun. Can the joy of a reclusive author and the compassion of a shrimp-boat preacher thaw Kerry’s frigid heart?
Lillie Beth in Summer by Eva Marie Everson
With the untimely death of his wife, Dr. James Gillespie believes God has abandoned him. He also believes he’s never met anyone like the young widow Lillie Beth, whose beloved Granny lies dying at home, and who sees a God who sweeps hope through a farmhouse window. Can a young woman whose husband died in Vietnam restore a faith that is all but dead.
Through an Autumn Window by Claire Fullerton
Because her larger than life mother Daphne Goodwyn is dead, forty-year-old Cate returns to Memphis with one thought in mind: something always goes wrong at a Southern funeral. But surrounded by the well-mannered society that raised her, the nostalgic rites of a three-day, autumn mourning bring the unexpected gift of the end of sibling rivalry.
A Magnolia Blooms in Winter by Ane Mulligan
With Broadway stardom within her reach, Morgan James returns home in winter to help an old friend. Maybe it’s just nostalgia, but when she sees him again, an old flame rekindles. When she’s called back to NYC to take the lead in a new musical, will fame be worth losing the man she loves?

The simple taste of salt water on her lips resuscitated Kerry Graham’s most painful memories. It had happened so many years ago. Neither had apologized. Then Mark was gone, and neither could. They’d been newlyweds, kids arguing over stupid things. Until the big one came, the monster argument about fidelity and lies and where were you last night? Hurt feelings and wounded pride eroded the feeble foundation of a two-year marriage.

Each new wave roared with memories of cruel words. Each soft rasp of water over the sand whispered apologies that never came. Seagulls and pelicans skimming the surface of the ocean searched for his capsized boat, just as the Coast Guard planes had long ago.

Kerry had left after that. The Gulf of Mexico could keep its dead. She’d moved inland, deeper into Texas, with no intent of tasting salt water again. But God called her back to the bay for a reason. If she didn’t need her job, would she have come?

Her Labrador retriever, Puddin, abandoned her to chase a wave, then nose a crab as it crawled to safety. The crab snapped its claws. Puddin jerked back. Even a dog knew to protect itself from pain.

She retrieved her buzzing cell phone from her pocket and checked the screen. Her boss. “Hi, Alan.”

“You there?” Alan Samuels never wasted time on niceties.

“Arrived a half hour ago.”

“Have you met our benefactor yet?”

“I drove to the address you gave me. She wasn’t there.” If Elena Marino had been home, Kerry wouldn’t have had so much time on her hands to take that treacherous walk down memory lane. “I’ll try back later, as soon as I get settled in.”

“How do you like the place she rented for you?”

She faced the bright aqua house in a row of other colorful houses built after the hurricane had demolished the area. A quiet neighborhood on a private beach. Perfect. “It’s nice. Two bedrooms, full kitchen. All the conveniences of home. Though why she didn’t offer me a room in her house is beyond me. It’s one of the few places in town that survived the hurricane, and it’s huge. Surely, she has a spare bedroom. She could’ve saved a lot of money, and I would’ve been able to work my own hours.”

“Oh.” Renting a house for her where pets were allowed illustrated Mrs. Marino’s generosity even more than the donation she intended to make to the museum.

“Besides,” Alan said, “she’s notorious for guarding her privacy. I’m surprised she’ll even let you into her house.”

“I’m surprised she asked for me specifically.”

“Me too. We have far more experienced and capable personnel.”

He cleared his throat. “Yeah, that didn’t come out right, but you know what I mean.”

“Yes, I know what you mean.” Everyone in the Poets and Authors of Texas Museum had more experience. At thirty-two, Kerry should’ve had a few years under her belt—and would have, except for the wedding and the funeral and the years of floundering as if she were the one lost at sea. The ink on her degree had barely dried when Elena Marino requested her help.

“Just be careful to respect her privacy. What she’s offering is a small percentage of what she has to offer a museum like ours, so stay in her good graces. And if you have any questions or doubts, call. You have my number.”

“I will.” Kerry disconnected and whistled for Puddin. “C’mon, boy. Let’s go unpack.”

Puddin nabbed a stick from the waves, probably burnt wood from a recent bonfire, and trotted toward her with hope in his eyes. He dropped the stick at her feet and sprayed her with the salt water he shook from his fur.

“You always want to play.” She scratched his wet ears. “Okay, just for a few minutes, then we’ll go inside.”

She tossed the stick, and Puddin waited for the wave to fetch it before chasing it into the water and trotting back with it trapped in his goofy canine grin. Laughing, she threw it one more time.

The man coming toward her wore dirty white shorts and a grungy blue pullover. His stained deck shoes kicked up sand as he walked, and the nearer he got, the stronger the odor of dead fish became. She might have, in moments of lunacy, missed the smell of the sea, but she never missed the other scents associated with it.

He stopped beside her and told her again she had a great dog, as if she hadn’t heard him the first time. “What’s his name?”

When Puddin saw the stranger standing beside her, he raced back and plopped his bottom right between them. Good boy.

“His name is Puddin.”

“Oh, I get it. Chocolate lab, chocolate pudding.” He reached out and gave the dog a good whiff of fish innards, then shoved both hands into his front pockets. “Haven’t seen you around here before. This is a private beach.”

“Yeah, that’s what the lease said.”

He smiled then, showing teeth that had never seen a whitening strip but didn’t really need one. “So, you’re the one who’s renting the house next door to me.”

The soft yellow beach bungalow he nodded toward bore a white trim, making the house look sunny and inviting. Several miles down the beach, she and Mark had owned one similar. They’d argued about the color. He wanted a brighter yellow; she wanted the softer hue. She won, and he’d admitted she was right. It was probably gone now.

The man in front of her offered his hand, but changed his mind and rubbed it on his shirt. “I’m Quinn Russell.”

“No, just nosy.” His sheepish expression worked for him. The sun-bleached hair dipping over his brow and his friendly blue eyes complemented the pink tinge in his cheeks. “This early in the spring, there’s not that many newcomers around here, unless they stray down from the public beach.”

“Now that we have that straight, I need to get Puddin dry and inside so we can settle in. Nice to meet you.” She walked away, slapping her thigh. “C’mon, Puddin.”

Quinn called, “Do you need help?”

With Puddin loping ahead of her, she jogged toward her rental. He trotted up the stairs to the balcony, already aware which house would be their home for the next month or so. She yanked the keys from her pocket and ordered him to stay while she retrieved an old towel from inside.

As she rubbed away sand and salt water from the lab’s coat, she watched Quinn amble toward his own house. When Mark was deep in thought, he would walk like that, with his head down and his hands in his pockets. Then he would look up, catch her eye, and dazzle her with his brilliant smile. If only she could see that smile again.

Quinn glanced her way once before disappearing from her line of sight. He probably noticed she hadn’t given him her name. As long as he could take a hint, they’d get along fine.

She opened the door and let Puddin inside. His claws clicked over the laminate wood-grain floor as he followed his nose in exploration. The message light blinked from the landline phone. She poked the button. Elena Marino’s alto voice greeted her briefly and left orders for her to arrive at Terrapin House by eight in the morning. “And do not be late. I cannot abide tardiness.”

Ride to the Altar