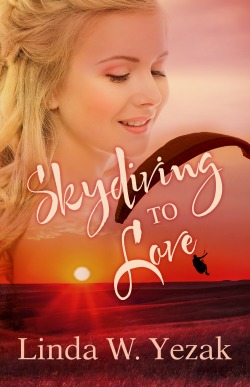 Originally one of the novellas included in The Bucket List Dare, now out of print.

JoJo Merritt squeezed her eyelids tighter and clamped her hands onto the armrests. I can’t.

What on earth had made her tell the girls that skydiving held top spot on her bucket list? As a veterinarian who owned a large animal practice, she was living her bucket list. Every calf she helped birth, every colicky horse she healed, fulfilled her dreams. But no — that wasn’t good enough for her old college quartet. She had to do something totally off the charts. What on God’s green earth had made her say skydiving?

The passenger jet’s engines revved. Her breath jerked from her lungs. All around her, bored businesspeople and cool-as-a-Popsicle travelers settled in with magazines and headphones. But for her, even this simple, normal flight had been a disaster so far.

The deep voice next to her pierced her panic. She lifted one lid for a peek at its source in the aisle seat. Any other time — like when her stomach wasn’t threatening to toss up everything she’d eaten in the past year — she would’ve found the man with the compassionate blue eyes attractive.

She slammed her lid shut. “I’m f-fine. Or I will be. Maybe. When we get where we’re going and land and I’m still in one piece, I’ll be fine. I-I think.”
Great. She wasn’t just stammering, she was throwing out more words than she’d spoken all week.

She peeked at him again. Great looking guy, square jaw, wavy dark hair. Too bad. If she didn’t turn him off by tossing her breakfast, she’d do it by jabbering like an idiot.

His gentle laugh caressed her like a velvet glove. “You’ll be fine. I know the pilot. Never lost a passenger.”

Yet. He forgot the yet. Always a first time.

The plane began moving, taxiing this way, then that. She had no clue where because all she could see were the backs of her eyelids. Soon the engines pitched to a high whine and the plane moved faster and faster and she couldn’t breathe and her heart lodged in her throat and threatened to choke her to death which didn’t matter because she couldn’t breathe. The engines roared, her brain screamed—

Then the plane lifted, leaving her stomach back on the runway. No big loss. She was going to throw it up anyway.

They climbed and banked to the right. The engines fell quiet, and the muffled sounds of the other passengers reached through her fear. Her shoulders relaxed, her heartbeat returned to normal. Finally, she dared to open her eyes and look out the window. Puffy clouds drifted by, giving her only the occasional glimpse of the small towns and fields below. Before long, the ranchland scenery would shift to a cityscape as they flew over Austin and, soon after, over San Antonio. And then the pilot would land. God bless him.

Mr. Dark-and-Handsome had traded the compassion in his eyes for humor. Kind humor, but humor just the same … okay, no. He was laughing at her. Who wouldn’t?

She flexed her cramped fingers and offered him a lame smile. “Yeah, I’m better. This is my first flight.”

She shook with him. “JoJo Merritt.”

Small talk. They would now drift into small talk, something she’d blissfully avoided in her day-to-day life. She said she was from Hereford; he said he was originally from nearby Amarillo. She told him she was a large animal vet; he worked as a seismic engineer in San Antonio, where they were headed. She stifled a yawn.

Had she remembered her iPad, she could’ve tuned him out with a great audio book while watching the clouds below. But in her rush to get this week over with, she’d forgotten it.

At least he was nice to look at, animated as he described whatever project he spoke of. Intelligent eyes. Amarillo was near enough to Hereford, they could visit when he came home, yet far enough away not to stumble over each other. But it didn’t matter. She wasn’t looking for male companionship, just to finish her mission so she could head back to more earthbound things like cattle, horses, and goats.

“I’ve bored you enough with my business talk,” Mitch said. “What about you? What are your plans while you’re in San Antonio?”

His friendly chatter had kept her nerves calm during the bulk of the flight, but now, as they jetted over more densely populated areas, he decided to include her in the conversation. She sighed inwardly. Being rude was not an option.

“I’ve always wanted to see the River Walk,” which was why she chose the jumping school there instead of the one in Dallas. “Maybe take in El Mercado.”

Right. That part did sound relaxing. Jumping from somewhere in the sky, putting her trust in a parachute someone else packed — that didn’t sound relaxing.

She shook her head.

“You’d love it. They make the best pork dish I’ve ever eaten. Like pork?”

“They have traditional stuff too. Enchiladas, tacos, nachos …”

The wings tilted to the left. The plane slowed noticeably. Taking off had been horrid. Being up hadn’t been so bad — none of the plane-shuddering turbulence she’d heard of. But what would landing be like?

“You do like Mexican food, don’t you? I’m sure they have an American menu—”

“Please!” She shot her hand up and scrunched her eyes shut. “Just stop talking, okay? Please?”

The plane had tilted deeper to the left and slowed further.

She slipped her hands under her thighs to keep them from shaking and dared a glance out the window at the city below.

No runways. No place to land.

And the plane kept getting slower.

Was the pilot out of his mind? There was no place to land!

She hunched her shoulders forward. If she could close in on herself, turn herself into a tiny ball, maybe the impact wouldn’t hurt so bad.

Well, that was stupid, wasn’t it? The impact would kill her! They were all going to die!

Mitch chuckled and said something along the lines of everything being all right. At least that was what it sounded like. Hard to tell over the blood rushing in her ears and the relentless we’re-gonna-die soundtrack.

The plane leveled and dropped lower.

Her stomach leapt to her throat.

Where would they land? There’d been no airport, no runway in sight. Maybe if she opened her eyes, she’d see one.

No. No, this was fine. If they were going to crash, she’d just as soon not see the ground rushing up to greet her.

The plane bounced slightly; the wheels screeched. The engine’s whine dropped from a high-pitched squeal to a lower, though not soothing, tone. The passenger jet slowed more and more, until it felt like the speed of a Sunday drive. People rustled around her, anxious to get their gear from the overhead compartments and move on with their day’s activities.

She just wanted the plane to stop so she could unclench her fists and catch her first glimpse of San Antonio. From the ground.

Mitch nudged her. “We’re at the terminal.”

With her stomach lodged in her throat, she could do nothing more to acknowledge him than nod crazily like a bobble-head.

“You can open your eyes now.”

“Oh, okay.” She’d had them squinched so tightly, the right lid began to twitch.

He stood in the aisle with his carry-on bag strapped over his shoulder. “Want me to get your bag?”

“If you wouldn’t mind.” Maybe that would give her a moment to flex her cramping fingers.

The door opened, the flight attendant spoke unintelligible words through a scratchy intercom, and the restless travelers began to file out.

Mitch held up the line to let her in. “What did I tell you? We landed just fine. Flying’s not so bad.”

She managed a feeble smile as she squeezed in front of him and followed everyone out and into the airport. Her nerves felt tight enough to tune, and her stomach threatened again. How would she survive skydiving if she could barely survive a simple one-hour flight?

She rolled her suitcase far enough into her room to allow the door to close behind her, then dropped it and bee-lined toward the window. She’d spent a small fortune for a hotel right on the River Walk, though not enough of a fortune to get a river-front room. Still, when she drew the shades aside, she sucked in a breath.

The city view was magnificent. And she could walk anywhere she wanted to go.
Except to the airport where she’d take her skydiving lessons.

She released the drape panel and dropped heavily into the cushioned armchair next to the window. The flight here had just about sapped every ounce of strength from her. Her fingers still felt gnarled from being clamped to the seat arms. How would she survive going up in a plane again, much less jumping out?

Her cell phone chimed, and she dug it out of her pocket.

JoJo sighed. Having lost a limb while fighting in Afghanistan, Kat wouldn’t likely understand her fear. Nothing scared Kat. Ordinarily, nothing scared JoJo either.

She tossed her phone on the bed and stared at her suitcase. She might as well unpack. She’d be vacationing here for a week. Less, if the fall killed her.

REVIEWS FOR SKYDIVING TO LOVE

LLB reviewed Skydiving to Love📷 Light and Fun with a Better-than-Hallmark Finish October 22, 2020:

Sometimes you need quick closure or a change of pace. A fun-loving novella is just the answer to that, and this is a good one. I’ve been reading lots of long fiction, and I needed to take a breather with something light and fun. Skydiving to Love was out of my regular reading norm, but I’ve read other things by this author and know her work will satisfy with it’s quick-flowing, fun spirit.

Skydiving to Love took a clever idea of a funky bucket list, threw in a unique heroine with some funny quirks, a hunky hero with loads of charm, presented just the right problem–and oh! What a finish! I can whole-heartedly say that if you enjoy shorter length, sweet romance with a better-than-Hallmark finish, you’ll enjoy Skydiving to Love.

JoJo made up a bucket list item, then had to make good on her promise. I’ll tell ya, I loved this book. It is so entertaining, so worth reading, and I stayed with the story and it stayed with me. I love her characters, I love the romance, I love the conquering fears. Made me wonder if I could do it. But I think I might react like JoJo. Highly recommend this quick read. Great diversion from reality right now.

From the very first word of SKYDIVING TO LOVE, I was swept away in this amazing story. MS YEZAK is an amazing writer, with a remarkable talent for telling a story. Her characters are three dimensional, and are sure to win their way into your heart. SKYDIVING TO LOVE is the best short story I have EVER read. Most writers – in my opinion – cannot pull off a good short story. That is not the case with MS YEZAK. Everything about SKYDIVING TO LOVE is perfect.

Writing in Obedience
Scroll to top