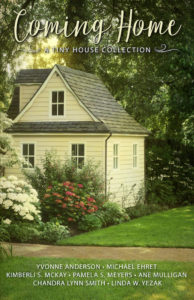 With her hand tucked in her father’s elbow, Kayla Mullins strolled, step by measured step, down the carpeted aisle, crushing the delicate rose petals scattered about by her toddling, soon-to-be nieces. Peach-hued petals. White. Yellow. All from roses brought in for a September wedding, all bruised by her champagne-colored sandals peeking out from beneath her satin gown as she walked. Right foot. Left foot. Pause. Right foot . . .

She really should raise her eyes and look at her groom, Nicholas Weatherby. She should sneak a glance at the one hundred fifty-eight guests who right this minute were staring at her. Out of everyone in the sanctuary, she knew probably fifteen. Twenty, tops. Row upon row of the attendees on the bride’s side were her parents’ contacts and clients. Row upon row of the attendees on the groom’s side were his parents’ contacts and clients. And the tiny cluster of groomsmen, ushers, and bridesmaids standing near the altar were actual friends of the bride and groom. What a spectacle.

As she reached the steps to the altar, she finally glanced up at Nick. His handsome brow glistened with beads of sweat, his tanned skin seemed pale.

The preacher asked, “Who gives this woman in marriage?”

“Her mother and I do.” Her father’s voice broke, bringing a lump to her throat. When he’d first seen her in her gown, with her hair done up and Grandma Mullins’s emerald against her throat, he choked up right then and there. First time Kayla had seen him cry since Grandma passed.

He grazed her cheek with his lips, offered a whispered I love you, and disappeared somewhere behind her. She closed her eyes. I love you too, Daddy.

She sighed and looked again at Nick. His aristocratic stance. His perfect jet-black hair. His broad shoulders beautifully filling out his navy tux. His once-starched collar, now limp and stained with sweat.

She could do worse. He was a good man, fun and funny. And he’d be a good provider. It wouldn’t be a loveless marriage, not entirely. They’d been friends forever. They got along well. It would be . . . comfortable.

He reached for her hand, and she gave it as she lifted her hem and stepped onto the dais. Then he pulled her closer than he should have and whispered, “Do you really want to do this?”

She caught her breath, searched his eyes, then glimpsed her brother standing in the position of best man. Kade was the gilded son, and their younger sister, Shari, was the indulged baby, leaving Kayla in the position of the obedient—and invisible—middle child, even though she and Kade were only minutes apart in age. Kade and Shari did as they pleased. Kayla, on the other hand, buckled and did as expected.

“No,” she said softly. “No, I don’t. You’re a great guy, Nick, but we’ve always been friends. I’ve never thought of you in terms of marriage.”

The preacher made a point of clearing his throat, and murmurs rose from a crowd that seemed miles away as she focused on Nick.

He kissed her forehead. “You’ll always be one of my best friends, but I can’t do this. Pleasing our parents isn’t a reason to marry.”

“I agree.” She glanced to the right at the anxious faces on the first few rows below. At her mother, whose tear-reddened eyes reflected the questions racing through her mind. And again at Kade, who winked and offered a devious smile. She returned her focus to Nick. “What do we do?”

“Leave it to me. I’ll make the announcement.” He shifted her toward Kade.

Her brother took her elbow. “We’re getting out of here. Grab your skirt. We gotta run.”

Whatever the guys had in mind must’ve been insane. Cockeyed crazy.

She loved her parents, but she suddenly felt like the strings had snapped on a too-tight corset, and at last she could breathe. Laughing, she tossed her bouquet over her shoulder to the bridesmaids behind her, grabbed the yards of material that made up her grandiose gown, and let Kade whisk her out of the sanctuary through the choir door. Their heels clattered in the church’s empty corridors until he tugged her to one of the exits.

In the last rays of the sunset, his Ford pickup gleamed a soft, heather gray. Her chariot.

He opened the door and helped her inside, then stuffed the satin gown around her. “I couldn’t let you do it. And when I found out he didn’t want to get married either—at least not to you—I had to get you out of there.”

“He’s in love with a girl at the office. Just hadn’t been able to ask her out because he was engaged to you.”

He closed her inside and sprinted to the driver’s side, yanking off his bow tie as he went. Once he landed behind the wheel, he jerked a thumb toward the back seat. “Brought something to change into so you can get out of that princess costume. I hope I got what you need.”

“Whatever it is will be perfect.” She pulled the tiara and veil from her hair and tossed them into the back. “Daddy’s going to kill us. You know that, right?”

He turned into traffic from the church parking lot. “That’s why I’m taking you to my place. Let him cool down for a bit.”

She twisted to look at the suitcase he’d brought. “If we’re waiting for him to cool down, you didn’t pack enough.”

The moment she said hello, she knew they’d put her on speaker. They’d double-teamed her.

“What were you thinking to leave poor Nicholas at the altar like that?” Mama’s voice bordered on shrill. “His parents were mortified! And we—”

“Do you realize how much that whole fiasco cost?” Anger pulsed from Daddy’s stern voice. “Money doesn’t fall like horse apples, you know.”

She pushed aside her near-empty bowl of cornflakes—the only thing palatable in her brother’s apartment—and pressed a hand to her stomach. The contents soured and made her queasy. Kade grabbed her bowl and helped himself, probably thankful he wasn’t on the receiving end of this call.

“Well?” her mother demanded. “What do you have to say for yourself?”

“Explain yourself, young lady.” Her father bellowed loudly enough Kayla could’ve heard him without the phone.

“What is there to explain? Nick and I don’t love each other that way. We’re friends. Good friends, but friends just the same.”

“But he proposed!” Mama’s tone pitched an octave higher.

“He proposed for the same reason I said yes. His parents pressured him into it.”

“Are you saying we pressured you?”

Her stomach roiled. She thrust her cell phone at Kade and darted to the bathroom, barely arriving in time.

After a few moments, Kade tapped on the bathroom door. “You okay?”

She rinsed her mouth, dried her lips on a towel, and stepped out. “I’m fine.”

“Yeah, you look fine if undead-gray is the color you’re going for.”

“Ha. Ha.” She dragged herself into the living room and flopped onto the sofa. “They were furious.”

“Yep. Pretty ticked off.” He settled beside her and pulled her into his arms, knuckling her head before snugging her to his side. A shock of blond hair a shade lighter than hers, thanks to long hours in the sun, dusted his brow. His hair, hazel eyes, and dimples were the only features they shared. The differences—the bristly jaw, the impressive height, the broad chest and bulging muscles—were attributed to his being all male.

He rubbed her shoulder. “You never were much good at conflict.”

“I need to buck up. Life is full of conflict, and I can’t go running off to toss my cornflakes every time something upsets me.”

“I’ll try to go shopping tomorrow. Give you something else to toss.”

She jabbed him in the side. “I’d rather not toss anything at all.”

“If you keep answering their calls, I’ll have to stock up on Pepto.”

“I’m sure they’ll figure it out, if they haven’t already. All your friends were left at the altar, watching the true version of Runaway Bride, so if you’re not at your place, you must be here. You definitely wouldn’t be at Nick’s.”

She leaned against him. “He didn’t want to marry me either, yet there we both were. Can you imagine two intelligent, independent adults caving in to their parents like that? Lands. Neither of us had the spine to stand up to them. What does that say about us?”

“It says that you’re both people pleasers.”

“It says we’re both wimps!” She held up her hand to tick off on her fingers her list of self-accusations. “I went to the same college Mama did because she wanted me to. Took the job Daddy set up for me. Then I almost married the man they thought best for me. Is that not insane? Who does that?”

“Not anymore.” She launched off the couch to pace the room. No twenty-five-year-old woman should be that much under her parents’ thumbs. She whirled around. “Do you know what they did? What Daddy did?”

“He set me up in an arranged marriage to build an empire.”

“No, really, think about it. Mama’s a real estate broker, Daddy’s a developer, and I’m an architect. The only thing missing is the real estate attorney, and Nick fills the bill as a partner in Weatherby and Weatherby.”

“What would they need a lawyer for? As a broker, Mom can close deals on property she sells without an attorney.”

“Yes, but Nick’s not limited to real estate. He’s also in estate planning and wills and probate. He can give them a heads-up on all sorts of things like foreclosures and estate sales. It’s like having insider information.”

“And you think that’s why they wanted you to marry him? Why would you go along with it?”

“Because it’s so much easier to just do what they want.” She crossed her arms and stared blindly at the equestrian trophies on his fireplace mantel. Giving in had always been easier. She heaved out a sigh and turned around. “Besides, Nick’s a great guy. He was my first romance when we were kids, and hanging out with him seemed natural. I guess when Chad and I broke up, and Nick broke up with Heather, we migrated toward each other. I didn’t know about the girl in the office.”

Kade raised a brow as if waiting for the epiphany to hit her.

“I guess our being together so much is why Mama and Daddy shoved us toward marriage.”

She swept her hand toward the trophies on the mantel. “You’re doing what I want to do.”  He straightened his spine and raised his nose in the air. “Mullins women are not raised to be stable hands.”

She grinned. “You sound just like Daddy. But you’re not a stable hand. You’re a horse trainer.” Kade bought horses, trained them in reining and dressage, then sold them at a remarkable profit. A stable full of horses was often associated with wealth. Funny how her father had ignored that fact. “I want to train horses too.”

“And whose fault is that?” She wilted into an overstuffed chair. “Let me answer that for you. Mine.”

“Look, Cricket.” He leaned forward. “You want to change your life? Do something about it.”

A Southern Season
Scroll to top